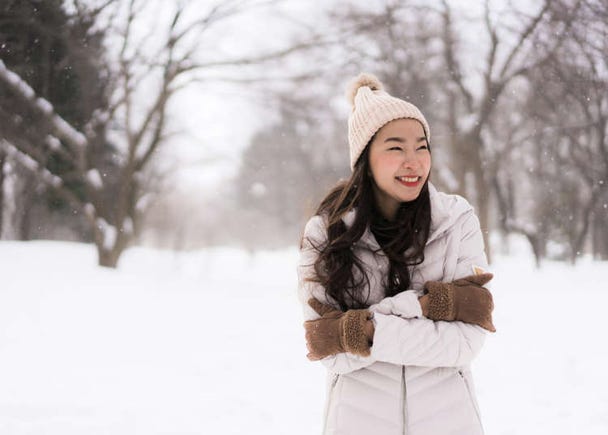 Before coming to Hokkaido many people will first research the various places they wish to visit. Do they feel that there is a difference between what they imagined a place would be like from looking at pictures of it and what it actually was like? Surprises and memorable experiences are often born from such differences in everyday scenery and culture. This is especially true when visiting Hokkaido! We asked people who felt that way to tell us about their experiences so we could get a better understanding of sightseeing places in Hokkaido that one should be attentive to. 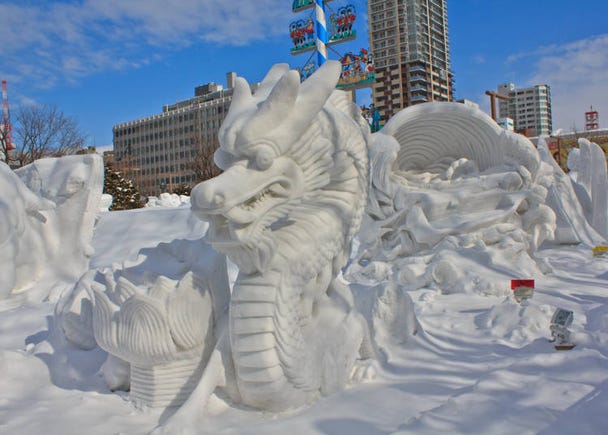 “The scale of the Snow Festival in Sapporo is really big. That surprised me. The first time I went, I went with an Australian who had never seen snow before and he suddenly began making snowballs and throwing them at everyone. Like a child, he was laughing and saying ‘It’s so cold, but such great fun! I love it!’” (American, male)

When you think of Hokkaido, snow comes to mind. People come from all over the world to enjoy winter sports and the stunning winter wonderland covered in snow, especially with the finely powdered snow produced by the cold, dry air.

Snowy scenes can be seen in all regions of Hokkaido. Perhaps most famous of all, though, is the Sapporo Snow Festival. This is a major winter event held in the 1.5 kilometer-long Odori Park featuring large snow statues, snowboard jumps, and ice rinks. Everything is truly impressive, from the amount of snow - as much as 500 5-ton truckloads - to the heavy equipment used to make these snow behemoths, some as much as 15 meters tall! 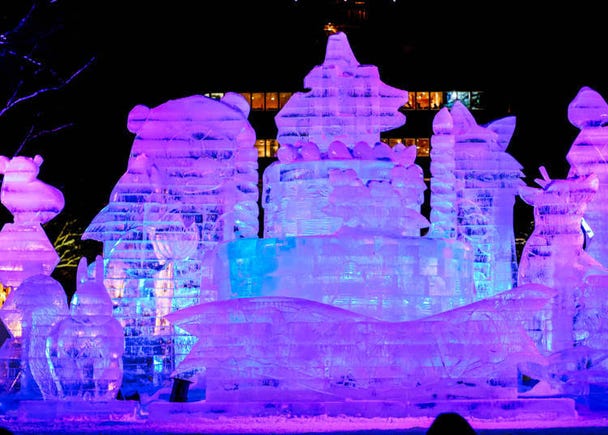 But the trade-off for beautiful Hokkaido's snowy scenes is the cold. Local residents use the expression shibareru (chilled to the bone) to describe Hokkaido's winters which are biting cold; the average temperature in January is 0.6 degrees below zero. And this is in Sapporo which is not as cold relative to other areas in the center of the prefecture. You need to wear clothing that protects your skin from the cold air because it feels more “painful” than “cold”. But Sapporo residents have a secret way for getting through the winter...

“I am from New York so I thought I was accustomed to cold weather, but the winters in Hokkaido are really cold. I was surprised, though, because there are really some great underground shopping areas in Sapporo! They are really interesting and really convenient in winter. I thought they were a little bit like a maze, but the next time I come, I plan to spend more time exploring them.” (American, male)

The secret is “Don’t go outside!” From Sapporo Station in the north to the Susukino underground station there is an underground passageway running for about two kilometers. There is an east-west underground town or underground passage that connects the Tohoku Line and the Toho Line, and it also connects to the underground floors of major buildings and hotels, so you can walk without going outdoors in a fairly large area. The city center of Sapporo is like a checker board, so when local residents hear that the address of where they want to go is near such and such place, they are able to walk underground to the exit nearest that address.

Winter isn't the only beautiful season! Hokkaido is full of stunning scenery year-round 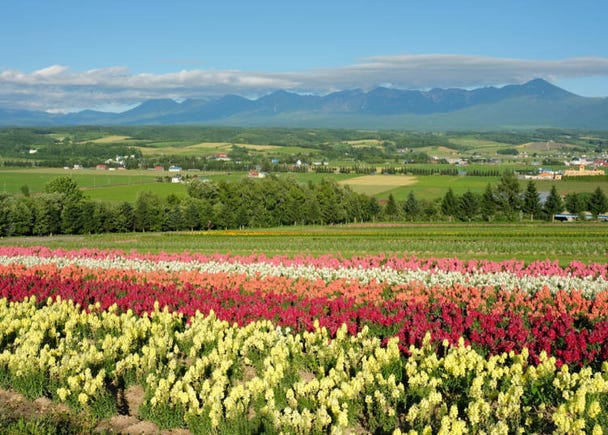 “The main image of Hokkaido is its winter snowy landscapes, however in summer Hokkaido presents a completely different picture when it is transformed into fields of flowers and rice fields. That is amazing! Hokkaido is sheer white in winter but very colorful in summer. Many Taiwanese like colorful things so maybe they would feel comfortable in Hokkaido.” (Taiwanese, female)

If you come to Hokkaido imagining it to be a snowy place, in summer you would be presented with a completely different picture. You don't have to venture far from cities to find idyllic rural scenery interspersed with fields and meadows of various crops such as rice, wheat and vegetables. In addition, in fields such as those for rapeseed, sunflower, and flax that are raw material crops for oils, when their flowers bloom they dye the fields in yellows and blues. You also should not miss the natural fields of flowers. Each may be simple wild flowers or grass, but during the short summer they bloom in a colorful array as though they were in competition with one another. There are many spots to choose from to enjoy vistas of flowers in Hokkaido from the Wakka Wild Flower Park in the north to the Kiritappu Wetlands in the east as well as the Koshimizu Wild Flower Garden.

"I visited Komagatake volcano. There are a few volcanoes in Europe, but this one's natural beauty took my breath away. From the national park I was able to take some great photos of the lake with the volcano in the background. It's not really possible to take that kind of photo in England. Then I rented a bike and went cycling in the area, and cycled to this amazing roast beef sandwich place I'd heard about. It made a perfect day trip for me!" (British, female)

More people are now able to enjoy these many spots in the wilderness because footpaths have recently been created and there are guided tours. There are also many types of activities offered, such as road bike and mountain bike rental, and even canoe and kayak rental. There's a lot of information available for your research. But.... 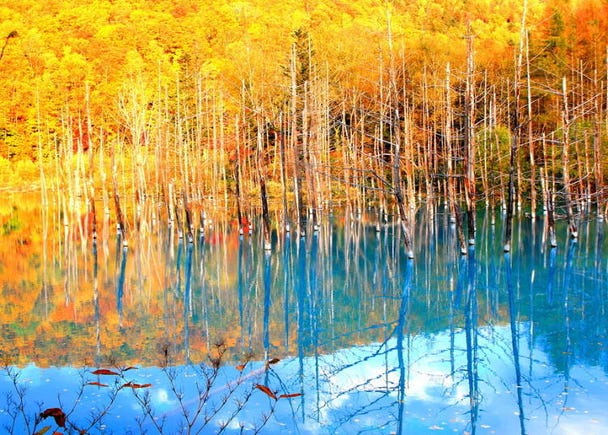 "The ‘Blue Pond’ was truly beautiful! But I was a little surprised because it was more like a really small artificial pond. I had imagined that it would have been much larger. And the river nearby was also of the same blue color..." (American, female)

... it was actually different than she had expected (the "nearby river" was the Bie River which is also called the "Blue River" as it is of the same color as the Blue Pond. "The Shirahige Falls nearby was also beautiful!." And the journey itself seems to have been very satisfying.

Hokkaido has so many hidden gems! 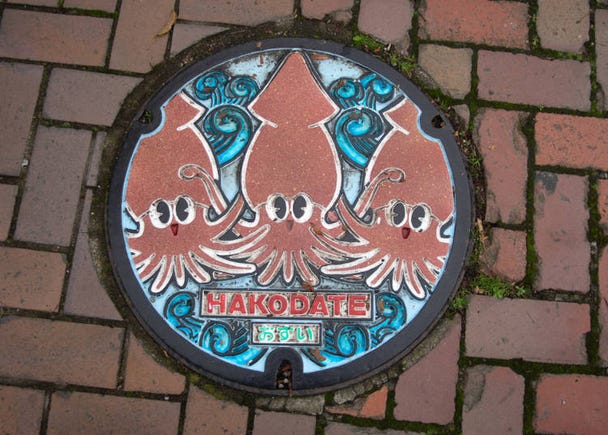 "I love the designs on the manhole covers and was able to see lots of interesting ones in Hokkaido. For example, there was one of three squid which was really cute. The designs based on the scenery of Mount Biei are great too. I could really get a sense of the local character through these." (American, male)

When traveling in Japan watch where you step! You can discover what are called "local manholes" that are specially designed manhole covers. In addition to comments about Hakodate and Biei, there were others about the clock tower in Sapporo and the red-crowned crane in Kushiro. In Noboribetsu that is famous for its hot springs there was a photo of a cute ogre and a bear. Local areas have their own unique character and often famous products or places that are the subject of designs used, so by visiting these areas you can get a better feeling of their uniqueness.

There are other things to notice in Hokkaido, too, besides manholes. These are the signboards called "Countryside Signs" installed at the borders of municipalities. Usually, only the name of the municipality is displayed or the municipal symbol is attached, but the 179 municipalities in Hokkaido all have different designs and illustrations! Here in addition to the municipalities' specialties and landmarks you will also find country signs featuring characters. A TV program plan to make a trip to see all the signs of the 179 municipalities created a boom in local areas resulting in these unique signs, so when traveling through the prefecture keep an eye open for them.

It's much bigger than imagined! Make sure to plan ahead! 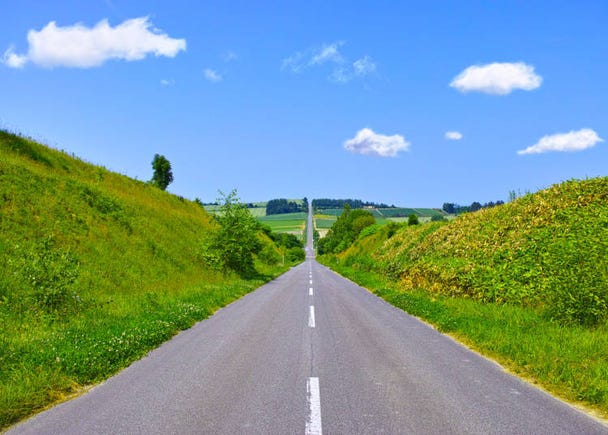 When you first visit beautiful Hokkaido, you may well be shocked by the immense size of the place, but don't worry - there are plenty of ways to prepare!

“Getting around is a lot harder than in Tokyo! If you don’t rent a car, you need to take a bus or walk, so planning where you want to go and how you will go there is important. That is something I really want to advise anyone planning on visiting Hokkaido.” (American, male)

Japanese living in other parts of the country also sometimes fail to realize how large Hokkaido actually is. It has a land area of 83,456 square kilometers which is about the same size as Austria. It extends about 500 kilometers east to west and 400 kilometers north to south. Many people ask “Is it possible to see the most famous places in two nights and three days?” But if you tried to do that, you wouldn't be able to see everything and you would end up passing through many places without having the chance to stop.

The major cities are connected by trains, buses and airplanes, but cars are the main form of transportation in Hokkaido. To go to places outside of the cities, public modes of transportation don't run as often as you might expect, and it can take more time than anticipated. If you want to enjoy your stay in Hokkaido there are three things to keep in mind:
1. Make an itinerary that allows for more time to be spent traveling
2. Renting a car is recommended
3. When using public transportation, do a lot of research in advance (some places may offer pickups and drop-offs)


If you keep these three things in mind when planning your trip you should be able to make the most of your time there!

Written by: Minna no kotoba sha