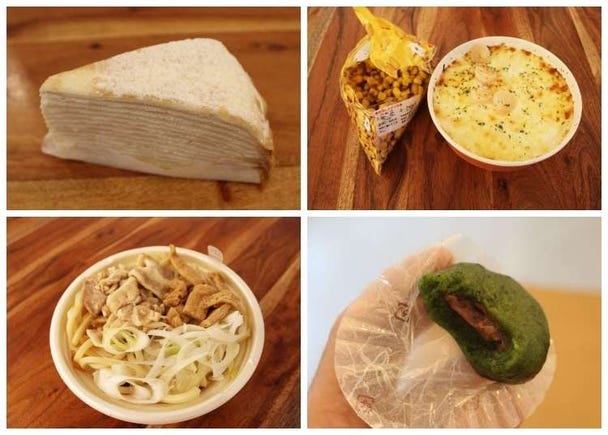 Japan's 7-Eleven has so cheap many dinner options! But what do they actually taste like, and is it like anything you've had before? Here are 7 of the best western and traditional Japanese dishes and desserts at the famous convenience store!

From DIY noodle packs with Japanese side salads to Western baked dishes accompanied by bags of vegetables, there’s a whole range of full dinner meals in Japan’s bountiful 7-Eleven stores. And that’s before we even mention the equally delicious desserts!

Better yet, the meals are super cheap; a whole meal (including dessert) should cost around 1,000 yen.

Here are are recommendations for a Western fusion dinner, a Japanese traditional-style dinner, and three dessert options.

NOTE: All Prices Below include tax. Main component of the meals can be heated for you in the store.

Japanese Flavors: Fill up With Noodles and a Side! 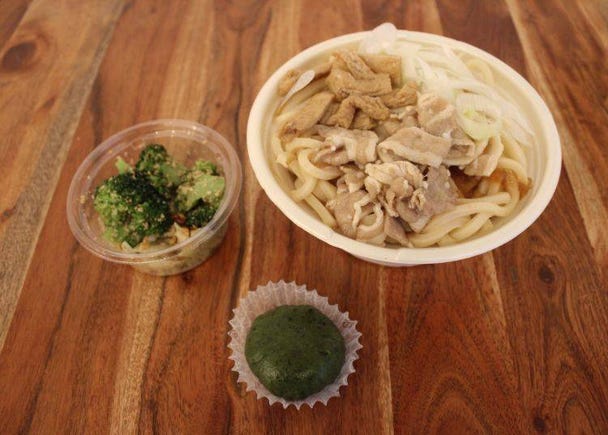 What are they?
Udon are thick cut noodles made from wheat-flour, often served in a hot soup or broth; this type of dish is called ‘kake udon’. 7-Eleven’s “Udon with Pork in Broth with Soy Sauce” is exactly that: thick noodles in a soy-based soup with thin-sliced pork, negi (spring onion) and shichimi seasoning (a togarashi pepper spice mix).

The “Broccoli & cabbage salad with sesame seeds” makes a nice accompaniment. Sesame, or ‘goma’, is one of the predominant flavors in Japanese cuisine – so much so that Japan is now the number one importer of sesame in the world. More recently it has been homegrown as well, with a small island in the south called Kikajima accounting for 70% of Japan’s sesame seed production. As such, this simple yet delicious salad, composed of boiled broccoli and cabbage marinated in a white sesame seed dressing, is a true taste of Japan. 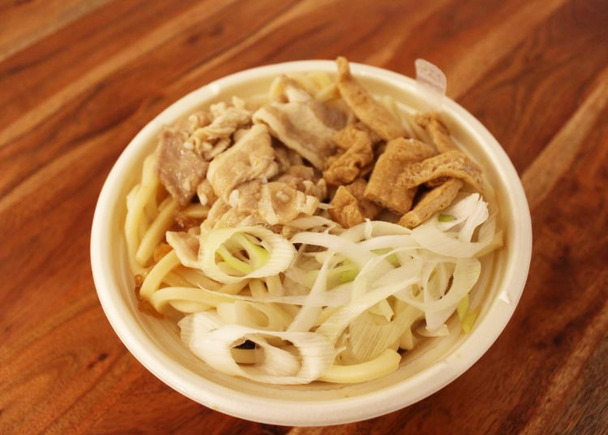 “Udon with Pork in Broth with Soy Sauce”

What are they similar to?
The “Udon with Pork in Broth with Soy Sauce” is like most bowls of Japanese soupy noodles you may have tasted. There are clear similarities with Tokyo-style ‘shoyu’ ramen, as the broth is light – unlike thick tonkotsu (pork bone) broths – yet the extra thickness of the noodles makes it a little more filling.

How do they taste?
The udon has a soft texture that absorbs the lightly salted soy broth flavors and makes slurping them up an absolute breeze. The crunch of the spring onion and chewiness of the pork help to make the dish a little more well-rounded, plus they balance it out with some fibre, vitamins and protein.

The broccoli and cabbage salad pack a serious sesame punch along with their crunchy textures. The sesame used is more of a paste, as opposed to raw or toasted seeds, meaning the flavor permeates throughout. 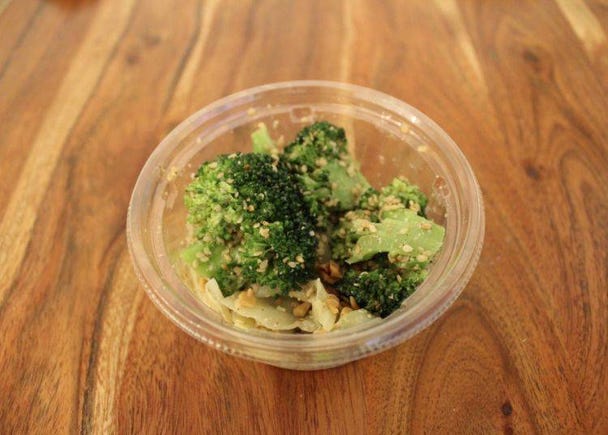 If you’re a fan of any sesame flavored meals or sauces, the salad should be a hit. Sesame dressings are commonplace in many Asian cuisines, and continuously so in western salad bars; if it’s your usual go-to salad topping, this is the side for you. 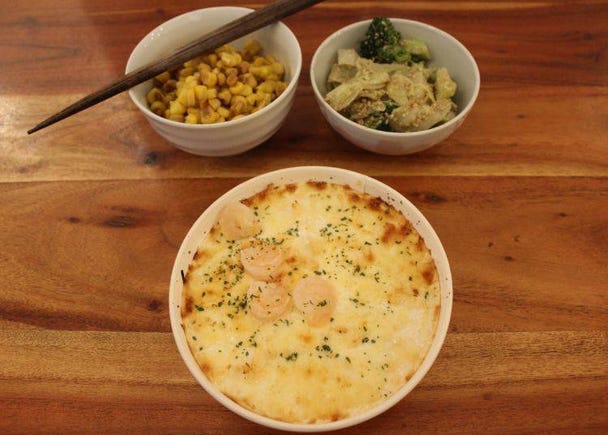 What are they?
7-Eleven’s “Rice Gratin & Shrimp with White Sauce” is a Japanese take on a classic French gratin de crevettes (shrimp gratin). With France and Japan being, arguably, the two frontrunners of the culinary world, fusions and cross-pollination of cooking techniques have sprung forth as a result. This 7-Eleven dish is a cheese bake with shrimp and a creamy sauce.

In Japanese, this dish is actually labelled as a "doria", a Japanese take on the French gratin. Japanese often use breadcrumbs, just as the French would, but this version places it on a bed of rice. 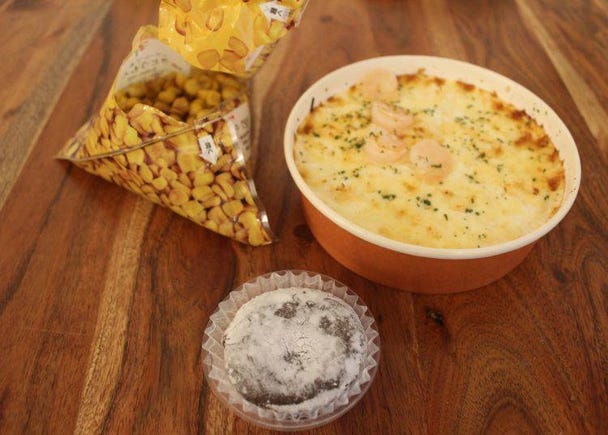 The “Grilled corn” side is a fairly simplistic yet delightfully more-ish dish: a bag of sweetcorn – off the cob – that has been flamed grilled to give it a nice little char, before being refrigerated. It can be eaten hot or cold. 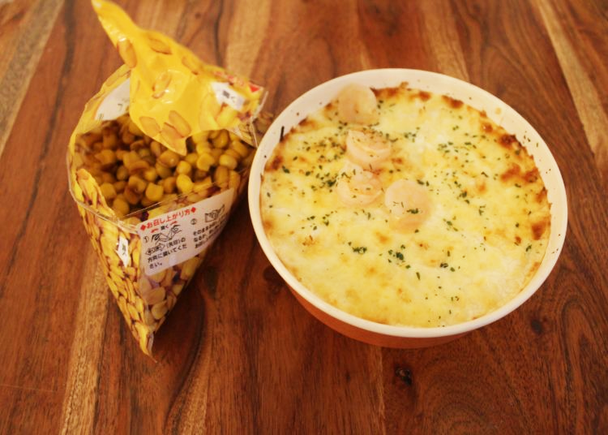 Why are they popular in Japan now?
Gratin’s popularity as a whole comes as little surprise as cheese has become a more central part of Japanese cuisine over the years. Recently, big cheesy portions are particularly popular. Korean food, pizza, and even cheesy vegetable skewers are all popular among Japan’s younger population, and all contain various levels of cheese. Combining the cheese with shrimp and rice, two mainstays of Japanese cuisine, has allowed it to become more palatable to local tastes, while offering nice little fusion of flavors for foreign visitors.

Corn was introduced to the Japanese by Portuguese colonialists in the 16th century; it’s now one of the country’s oldest dietary staples. As modern grilling has become a more commonplace cooking method in Japan – as can be seen in yakitori (grilled chicken), and yakiyasai (grilled vegetable) restaurants. Perhaps its time for grilled corn’s turn. Plus, grilling helps to bring out the vegetable’s natural sweetness. 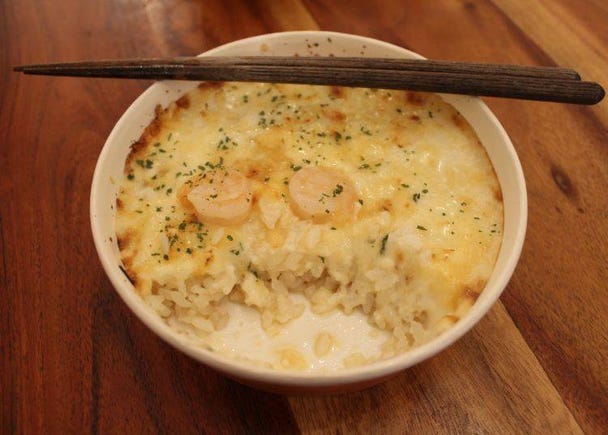 How do they taste?
The “Rice Gratin & Shrimp with White Sauce” tastes like a combination of two cuisine styles. The upper layer of crusty cheese and cooked and peeled shrimps layered on a cream sauce tastes immediately French. The bed of sticky rice underneath however, is unmistakable Japanese. There is a light saltiness throughout the dish, but the textural layers of crispy, smooth and chewy are the highlights.

7-Eleven’s “Grilled corn” is the perfect side, as it comes with a little barbecued char and quite a lot of sweetness – which the saltiness of the gratin will help to cut through. As you chomp through your gratin, you could even mix in some corn to elevate your meal to the next level. 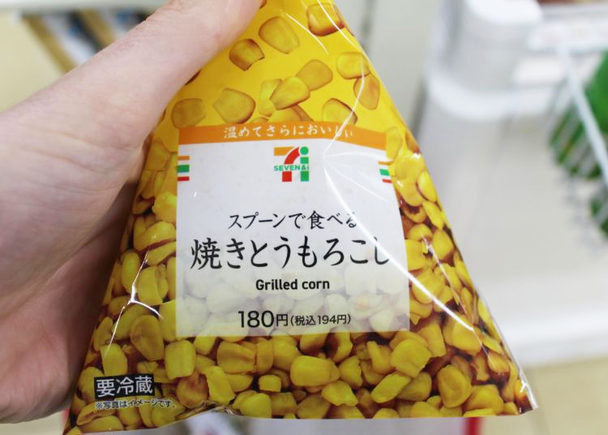 What are they similar to?
The gratin is quite similar to cheesy western pasta bakes, and of course it’s highly reminiscent of a French shrimp gratin. For those familiar with Korean food, the gratin draws some parallels with a non-spicy Korean cheese Tteokbokki. The rice however, gives it a unique Asian twist which makes the gratin pretty distinct.

The Grilled corn will strike a chord with fans of American BBQ cuisine popularized in the southern states; it’s a perfect marriage of char and sweetness.

What drinks do they go well with?
With quite a combination of flavors going on, we recommend a mild drink, like the aforementioned Japanese teas, or something milky, like a milkshake or one of 7-Eleven’s ready-made milk-based drinks and coffees, to help cleanse the palate after your meal.

Dessert: 3 Ways to Round Off Your Meal! 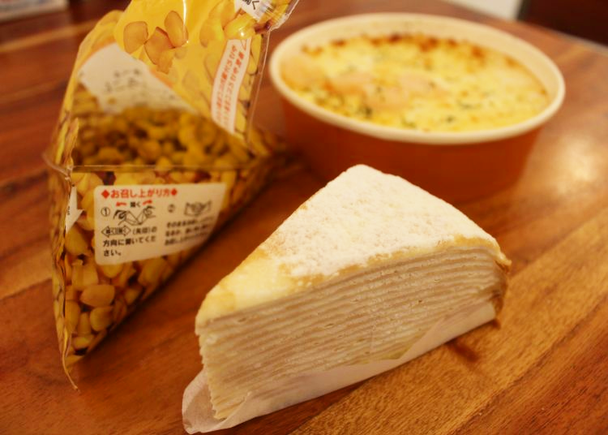 “Layered Crepe Cake” to round off your fusion meal

Of course, there’s always a little room for dessert. Whether you want something that feels as though it has come straight off the shelves a French patisserie, a distinctly Japanese treat, or a local favorite stuffed full of chocolate, 7-Eleven’s got you covered. 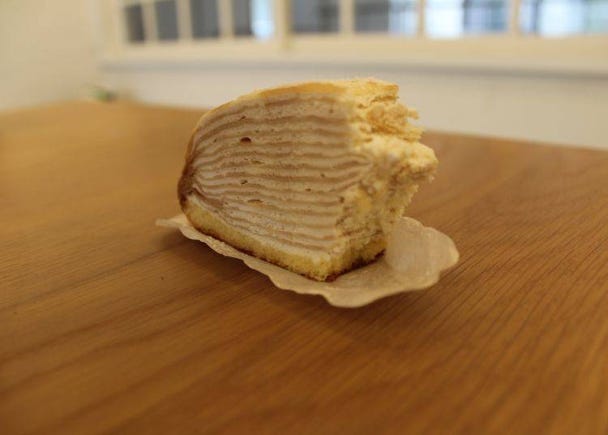 What are they?
7-Eleven’s “Layered Crepe Cake” - レアチーズミルクレープ (literally, ‘layer cheese milk crepe’) - is more cake than pancake. Layers of thin sweet bread are shaped into a slice of cake with a creamy filling in between the slices.

The “Mugwort Rice Cake, Red Bean” is the most Japanese of the lot: a floral-tasting bun made with mochi and filled with anko (sweet red bean paste). 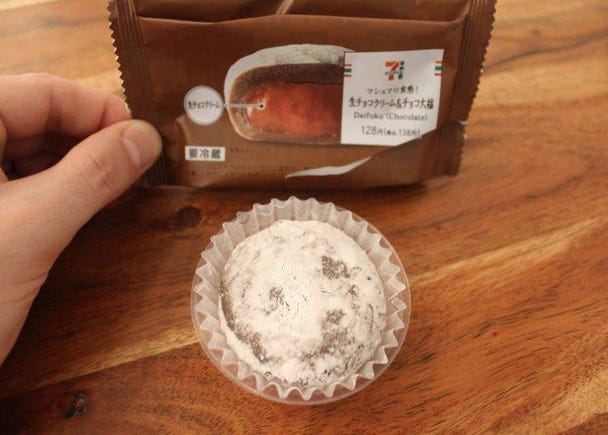 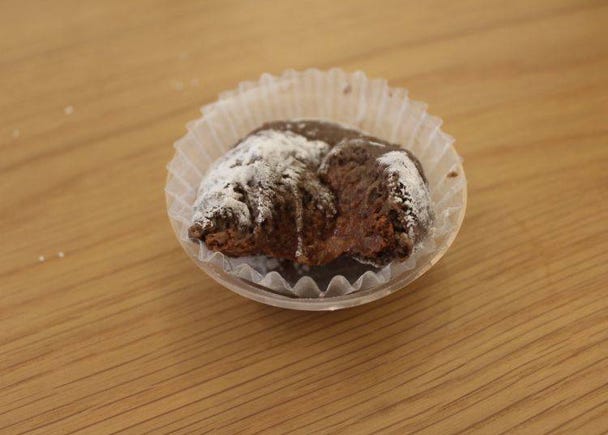 How do they taste?
The daifuku is also very sweet, with a rich center that’s sure to go down well with chocolate lovers. Both the outer mochi layer and the filling explode with chocolatey goodness.

The crepe cake is certainly the most indulgent of the three desserts, and thus, the most expensive. But the sweet creamy filling will be a hit with fans of cake, particularly if you like sponges or classic European cheesecake. Though crepe is in the name, this dessert doesn’t really have too many taste similarities with traditional French pancakes.

The mugwort mochi dessert is a little unique. Mugwort, a flowering plant, is used to give the mochi its distinctly botanical flavor and camo green color. The inside of the cake has a mildly sweet and mushy texture. It’s great for fans of traditional Japanese sweets who want to try something a little different. 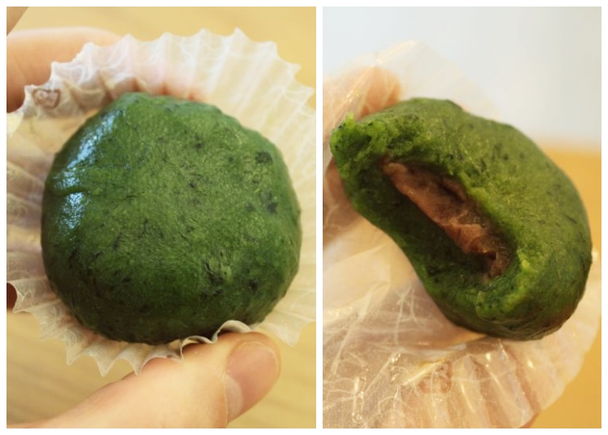 What are they similar to?
The daifuku and mugwort cake are fairly emblematic of Japanese desserts - particularly those sold at festivals and in tea houses.

On the other hand, 7-Eleven’s “Layered Crepe Cake” is like a mixture between a classic British Victoria Sponge (minus the jam) and traditional cheesecake. The thin layers give it a unique twist however.

What drinks do they go well with?
All of the desserts go well with coffee, as a nice bitter bite to balance the sugary flavors. Japanese desserts go super well with matcha (hot or cold), which is highly recommended if you opt for one of these.

*Availability and price may vary by store, season and time of purchase.
*Availability may also vary by prefecture.